There is simply no substitute for having an AED readily available and people trained to recognize the signs of cardiac arrest and respond quickly and appropriately!

The following article, written by Scott Springer, appeared on Cincinnati.com on 5/17/2016.

What Happened When Player Collapsed at Moeller Game 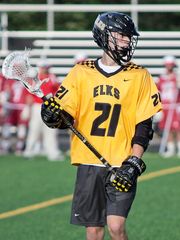 Centerville senior lacrosse midfielder Grant Mays was revived at Moeller High School after he was struck with a ball near his heart and collapsed on the field. (Photo: Cincinnati.com/Provided by Debbie Rankey)

KENWOOD – Grant Mays was not able to attend the Centerville High School scholar-athlete banquet Sunday. Considering the events of Saturday, the Elks lacrosse captain was fortunate to even make it to Sunday.

The senior midfielder appeared to make a gutsy play shortly after halftime of a game at Moeller, where the Elks trailed the Crusaders, 8-2. A Crusader shot on goal hit Mays on the left side of his chest, below his heart. On instinct, he picked up the ground ball and started running down field.

Then, he collapsed. Immediately, the referee stopped play.

“We knew something was pretty serious right away,” Moeller coach Sean McGinnis said. “They stopped the game and got the medical personnel out there. Then, it took a turn for the worse as his rhythm was off.”

That’s when the experience of Moeller head athletic trainer Craig Lindsey and head of security Rich Wallace paid off. Lindsey had passed up a local training conference to preside over two events on Moeller’s back fields – the lacrosse game and a rugby match. He also had the foresight to have an automated external defibrillator (AED) on site with contact sports on adjacent fields.

When it appeared standard methods were not going to be enough to revive Mays, University of Cincinnati intern Ashley Higginbotham ran off the sidelines and returned with the AED. Fortunately, a Centerville parent, Mike Jones, an emergency medical technician, was in the crowd, along with Dr. Rob Hill from Florida, who was in town to watch his Moeller son, Griffin.

All hands were on deck, including another Beacon Orthopaedics trainer, Josh Horner, from Princeton whom Lindsey had procured with multiple events on campus.

From the second Mays went down, this team of heroes sprung into action.

Eventually, they placed the device’s pads on Grant’s chest and, after one shock, he started breathing on his own. Not long after, Sycamore Township paramedics showed up and by the time Mays was in the ambulance, he was starting to stabilize. Wallace, an EMT himself and police chief of Amberley Village, had placed the 911 call earlier in the process.

“Without the AED, it could have gone the other way,” Lindsey said. “We’re so blessed that it did it’s job. You take it to practice and games every single day, but I never had to use it in 21 years.”

What occurred to Mays was a condition called “commotio cordis.” It’s something Lindsey and all trainers learn in college and is defined as a lethal disruption of heart rhythm caused by a direct blow to the chest while the heart is in between beats.

“When that happens, it sends the heart into a quivering state,” Lindsey said. “It’s not beating efficiently. It’s like the heart muscle is twitching and not firing.”

Whomever may have had doubts of the power of prayer before had to have at least come away with something to think about during those tense moments. Both teams gathered around the scene and all was quiet except for the sound of “Hail Mary” being repeated by those kneeling near Mays.

After Grant collapsed, the players witnessed his mother sprinting toward her son and sobbing.

“We held hands and did the only thing we knew to do: pray. Pray hard and loud,” Moeller junior lacrosse player Adam Kohlman said. “That kid needed us and that Mom needed us.”

While his son was being attended to, Doug Mays walked around the field asking spectators to pray. The nearby rugby game also stopped and those players joined in the spiritual efforts while Lindsey’s crew worked fervently on resuscitating Mays.

“It was almost like the perfect storm,” McGinnis said. “It’s a great blessing to have the right people watching our game and taking a tragic situation and turning it in to a positive result.”

Mays was taken to a hospital to be seen by a cardiologist. Lindsey, Wallace and McGinnis drove up later and were able to see Mays and his parents in the emergency room.

Because of Grant’s prescribed need for rest, his father is speaking for him until he is fully recuperated. Doug and Kelley Mays are forever grateful for the presence of qualified medical personnel and the presence of an AED.

“The biggest thing I can take away is the importance of having those devices, having them readily available and certified and having the training to use them,” Mays said. “These devices aren’t limited to athletes. Certainly, in this case, the athlete was the beneficiary. They can be life savers.”

The proof came shortly after the shock was administered. The first words from Grant Mays were, “Wow! I feel great!” according to his father. Of course, he was then advised to remain stable to allow the trained experts to continue their efforts.

The game was never finished, but the outcome was one for the ages. No one left the field with a loss.

“I felt helpless, his mother felt helpless,” Mays said. “When he drove away in the (life) squad, we felt very humbled. When he left the field on the gurney, I had my son back.”

Pretty much the entire campus had stopped what it was doing to surround Grant and his parents with prayer.

“We felt like we were part of a miracle,” Kohlman said.

The men of Moeller deliver

McGinnis has seen his team’s faith tested on and off the field. By tradition, the team prays at the statue of Mary on campus before climbing the stairs to compete at the Gerry Faust Complex. Faust himself still kisses the statue at every visit.

The Moeller mission on their website says the following:

As a Catholic school in the Marianist Tradition, Archbishop Moeller High School is a Christ-centered community, focusing on faith formation, academic achievement, individual growth, and service to others.

The mission was accomplished on this particular day when the sport no longer mattered, but the service and faith did. As grueling an opponent as Moeller can be, they can also be compassionate to a fallen foe.

“That’s what being a ‘Man of Moeller’ is,” McGinnis said. “A school like that is building faith in these young men.”

Moeller now turns toward the tournament where they will face Walnut Hills on May 18 on the same field. They will pray at the statue, then battle the Eagles. Craig Lindsey and the training staff hope to get an easy game where only ice and water are needed.

They’ll be there well before the game begins and long after it ends. They often toil in anonymity taping and wrapping athletes to keep them on the field. On occasion, the job becomes “bigger than life” when a life is saved.

Thanks to a prepared response, Centerville Elks senior Grant Mays will have an 18th birthday and graduate. He’ll be a student at Miami University in the fall.

While Grant’s lacrosse career may be over by choice, the Mays family strongly supports the lacrosse community, knowing what happened was an extremely rare situation.

“I can’t emphasize enough how we appreciate all of those people that helped.”