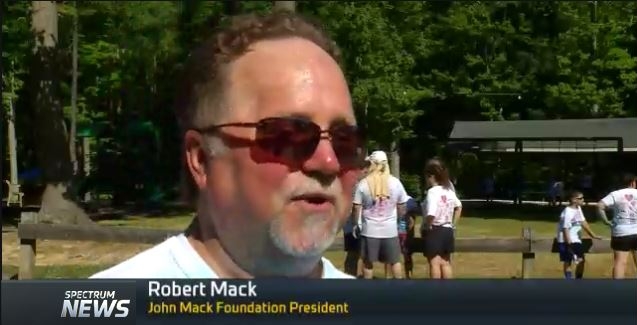 While it’s one of the busiest travel weekends of the year, plenty of people stayed local this holiday weekend and just took advantage of the beautiful weather. Time Warner Cable News/Spectrum News Reporter Camille DeLongis went out to find out how people spent their Independence Day outdoors.

BROOME COUNTY, N.Y. — Sunny skies and temperatures in the 80’s made for a picture perfect 4th of July in the Southern Tier.

“We decided it would be nice to kind of do the stereotypical thing. Come out, have a nice little picnic, maybe go swimming. We planned it a couple days ago, thought the weather has been really nice, why not,” said Skyler Harford, a Waverly resident.

If you stopped by nearly any park in Broome County, you could see dozens of families that had the same idea. They hit the outdoors for barbecue’s, boating, games and of course lots of swimming.

“Coming out here with some family and some friends to celebrate the 4th is awesome.  Grilling, going swimming, canoeing, whatever we can do out here to have fun, that’s what we’re doing,” said Michael Chapman, a Binghamton resident.

A little earlier in the day, people hit the streets for the Town of Union’s Colors of Independence 5K run. This year’s race benefitted the John Mack foundation, which purchases automated external defibrillators, and donates them to parks and various sports venues.

“It was great! we had a great day, beautiful weather, we had around 300 walkers and runners, a little over 200 signed up and then we had a lot come today, you know, day of race registration,” said Robert Mack, the President of the John Mack Foundation.

Runners said it was a great way to kick off their Independence Day festivities, all while giving back to the community.

“This was just a chance to come out and support, and hopefully get an AED someplace where someone needs it. It was hot but it was a fun race, I’ve never done a color run, so it was a new experience for me,” said Michele Hobbs, a Sayre, PA resident.

No matter their plans, everyone said, it’s just a beautiful day to celebrate America.