Heroes Saved a Life in Snowstorm

This article appeared as a “Letter to the Editor” on Pressconnects.com on April 4, 2017. It was submitted by Lorrie Smith, a Kirkwood, NY resident. It’s a powerful reminder on what a difference quick-thinking team work, CPR skills and a readily-available AED can make. 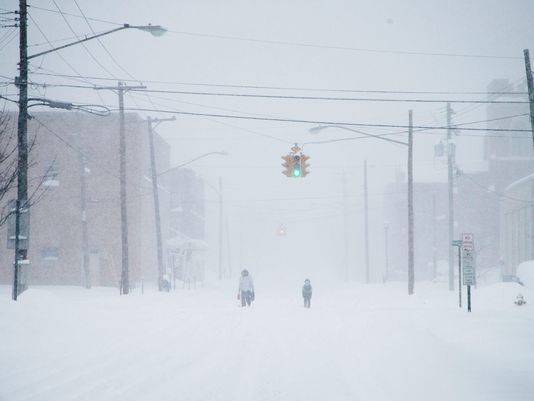 On Tuesday, March 14, when our region was hit with one of the most horrible snowstorms in history, a young man’s life was saved.

Like many other people that day, Nate Smith and his girlfriend, Amber Scarinzi, got their car stuck in the snow. What happened next became their destiny.

The father of a boy who played basketball with one of Nate’s sons came along and stopped to help them. Suddenly, Nate collapsed and began going into cardiac arrest. Amber, who is a nurse, and the man, who is a volunteer fireman, called 911 and started CPR immediately.

As fate would have it, two City of Binghamton police officers were travelling home from their shift, and they stopped to lend their much-needed support.

A few minutes later, an off-duty paramedic from Kirkwood who heard the 911 call, and a deputy from the Broome County Sheriff’s Department responded to the scene. Together, they used a defibrillator to restart Nate’s heart, and they all took turns administering CPR to keep his heart beating.

There are no words to adequately thank these selfless individuals who have become our heroes. Their humanitarianism and skill truly kept Nate alive!

We will be forever grateful to the snowplow driver who escorted the ambulance to the hospital, to the paramedics who were in the ambulance and to the emergency team from UHS Wilson Medical Center who literally stood by the doors waiting for Nate to arrive. Your quick action and special care for Nate and Amber will never be forgotten.

We would like to send a thank-you to the exceptional nurses in the Cardiac Care Unit for your kindness, compassion and your wonderful attitudes.

Nate’s team of doctors should be commended for their dedication and their knowledge of their field. Although tests never determined what caused this to happen, the surgery that they performed to treat Nate’s irregular heart rhythm arrhythmia will enable him to live a long and healthy life.

Finally, we would like to thank the countless people who prayed to God, and to Nate’s twin brother, Ryan, who is his guardian angel. Your messages of love and your unending help played an important role in Nate’s recovery.

The doctors at Wilson told us that only 5 percent of the people who experience this type of cardiac arrest live to tell about it. A miracle truly occurred for Nate, Amber, their children and our family.

Please consider taking a class in CPR and show your support for more defibrillators in your community. They may give someone that you love a second chance at life!