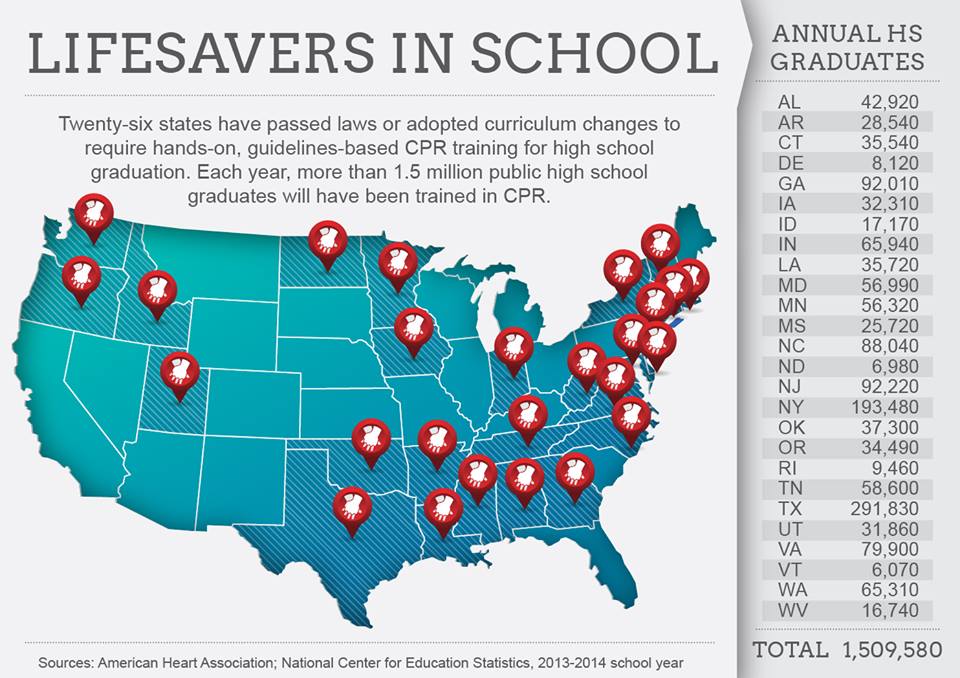 Given that the John Mack Foundation is based in Binghamton, New York, we’re thrilled with the recent news that New York State will now require CPR training for high school graduation.

More than half of U.S. states now require students to pass CPR training before graduation, with New York becoming the latest to add it to the curriculum this fall. New York is the 26th state to have such a requirement. The other states are Alabama, Arkansas, Connecticut, Delaware, Georgia, Idaho, Indiana, Iowa, Louisiana, Maryland, Minnesota, Mississippi, New Jersey, North Carolina, North Dakota, Oklahoma, Oregon, Rhode Island, Tennessee, Texas, Utah, Vermont, Virginia, Washington and West Virginia. That means more than 1.5 million students nationwide each year who will know what to do to help if someone experiences sudden cardiac arrest, one of the most common causes of death in the U.S.

According to the American Heart Association, more than 326,000 Americans experience sudden cardiac arrest outside of the hospital each year and nine out of ten will not survive. Fewer than half of the victims receive CPR. If a bystander administers CPR, the chances of survival can double or triple.

CPR in the first three minutes after cardiac arrest, even with the American Heart Association’s Hands-Only™ CPR, greatly improves survival odds by limiting oxygen deprivation and blood loss to the brain. The school-required training could add upwards of 1.5 million students per year who are trained to help, hopefully increasing those odds.

Prior to the New York CPR in Schools law, the John Mack Foundation recognized the opportunity to increase these lifesaving skills within our community and made donations to Binghamton High School, Seton Catholic Central High School and Union-Endicott High School to help set up CPR / AED programs. It’s one of the many ways that the John Mack Foundation is helping to increase the chances of survival for victims of sudden cardiac arrest.