Before You Need That AED, Make Sure It’s Functional 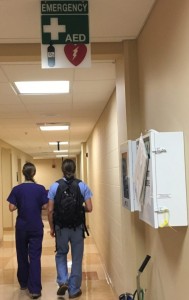 Students walk past a public-access automated external defibrillator in the University of Louisville School of Dentistry. Brad Sutton, M.D., and colleagues have found that a lack of AED registration correlates with an increased chance that an AED could malfunction if needed.

LOUISVILLE, KY — No national standards exist for the maintenance of automated external defibrillators (AEDs) and their registration with manufacturers, making these practices voluntary and highly variable. What the public may not realize, however, is that regions where there is a high degree of unregistered AEDs also show a much greater chance that these devices will fail if needed.

That’s the finding of a study conducted by cardiologist Brad Sutton, M.D., an assistant professor of medicine and assistant dean for health strategy and innovation at the University of Louisville School of Medicine. The group found that significant variability exists in how AEDs are registered and maintained and because of this variability, the true risk for failure remains unknown.

“We know that rapid bystander CPR and the appropriate use of AEDs increases survival rates for the more than 350,000 victims of sudden cardiac arrest in the United States each year,” Sutton said. “However, we found that the percentage of public access AEDs that fail standardized testing is quite high, and the incidence of potentially life-threatening malfunction is likely under reported.”

“Our data suggests that registering AEDs correlates with increased likelihood that the device will pass testing, and therefore, stand a greater chance of being operational if needed by someone having a cardiac arrest.”

“Sudden cardiac arrest is a leading cause of death in the United States,” Keisha Deonarine, senior director of community health for the American Heart Association in Kentuckiana, said. “The American Heart Association believes it is important to do a weekly or monthly visual inspection of AEDs to ensure they are in working order. It may be the difference between life and death.”

The group assessed AEDs in public, non-hospital settings in four geographically distinct regions – Seattle, Suffolk County, N.Y., Central Illinois and Louisville. Each AED was tested according to manufacturer guidelines. A total of 322 AEDs at 190 unique sites were investigated.

The team found that more than one-fifth of the devices – 21 percent – failed at least one phase of testing. Five percent had expired batteries, failing to power on at all and rendering them useless in the case of sudden cardiac arrest.

AED registration typically is handled the way it is with consumer products: The AED is registered with the vendor so the purchaser can be updated on potential recalls and advisories. There also is an industry built around AED maintenance, and many sites with AEDs outsource maintenance of the devices for a monthly fee. Sites with AEDs also can register the devices with some municipalities or other local authorities, but again, Sutton said, this varies greatly from region to region.

“Unfortunately, our data suggests that even when you find an AED in the time of need, it may not work,” Sutton said. “These devices require routine upkeep in order to remain functional and ready. This is the major message that our elected officials and community members need to be aware of.”

Sutton’s research group was made up of Jamie Heimroth, Stuart Crawford and Erica Sutton, M.D., of University of Louisville and Josh Matzke of Eureka College in Illinois. The team presented their findings in November at the American Heart Association Scientific Sessions, and Sutton said he is currently in talks with AED manufacturer Zoll Medical Corp. to expand this line of study across the United States.