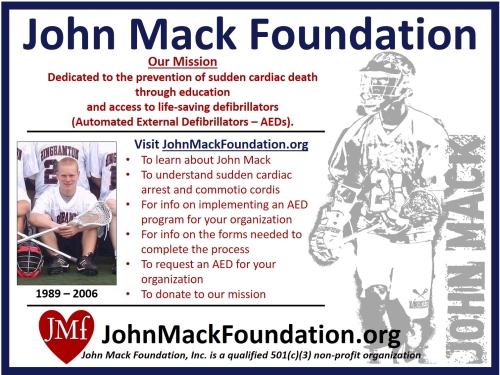 BINGHAMTON, N.Y. – In its 11th year, the John Mack Southern Tier Shootout lacrosse tournament continues to remember the Binghamton teen — while working to prevent other tragedies like the one that took his life.

In November 2006, Mack was fatally injured after a stick check to the chest while playing lacrosse. The strike was at just the precise moment to cause his heart to go out-of-sync. The condition is called commotio cordis and it can happen to anyone. It’s often caused by a lethal disruption to the heart rhythm and can sometimes be reversed by defibrillation. However, in Mack’s case it took 19 minutes to get an Automated External Defibrillator (AED) to the field. He passed away just a few days later.

Proceeds from the tournament help the John Mack Foundation donate defibrillators for community organizations to have on-hand.

“It was so painful that we felt that we wanted to make sure no other family went through what we went through.  AEDs should be where people gather, where people play sports. They need to be out there in the community,” said Robert Mack, John’s Uncle, who is the director of the tournament and President of the John Mack Foundation.

Robert Mack said along with the support of additional fundraisers, the foundation has helped about 150 organizations get AEDs over the past decade.